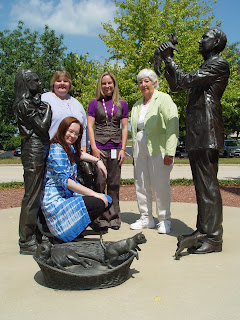 As mentioned on the AVMA at Work blog I will be at the AVMA Convention from Thursday night until Tuesday afternoon. Thus my newly resurrected blog will be afflicted with convention chatter. You may be spared pictures as I cannot work out where my camera has gone.

For the purposes of 'facilitating networking' with any of you who might be at the convention, we (in the Animal Welfare Division) had a few pictures taken (click to enlarge). I am the one in the blue-and-white shirt. The statue is right outside our headquarters here in Schaumburg.  For extra 'spottability' I will be laundering that shirt in time to take it to convention (yes, it will be clean). 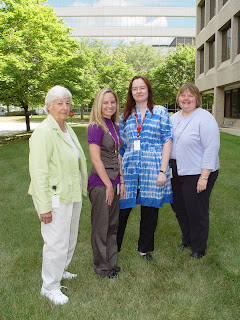 You can also keep track of where I am via twitter, and if you are either attending or following happenings at the convention the official twitter hashtag for the event is #AVMAconv

I have no idea what I will tweet about at convention but to avoid scaring off the few followers I have I will be keeping it down to no more than a tweet an hour--and the topic is more likely to be somebody-betta-give-me-coffee-right-now-b4-i-snap than anything truly enlightening.

p.s. the Blogger spellchecker doesn't think Schaumburg is a real word... and I think I agree....
at 1:43 PM

Email ThisBlogThis!Share to TwitterShare to FacebookShare to Pinterest
Labels: AVMAconv