Animal Welfare and the Case of Red Riding Hood 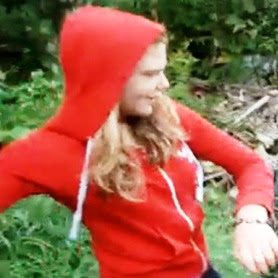 Recently a video emerged of a young girl killing small puppies by throwing them in a river.  The response was intense and predictable.  Because animal abuse is is evil, it stands to reason that the people who do it are monsters. The comments on news articles include judgments like "put her behind bars" and "inherent sadism, cruelty and disregard for life will remain unchanged".  Celebrity condemnations of the girl came from the likes of Twilight star actor Kellan Lutz.

In order to rescue the girl from the severe hostility a story that the puppies were recovered from the river and lived was apparently faked by family and neighbors. Because you don't totally give up on a teen girl even when she does something this bad--you try to help her learn it was wrong, and learn how she should behave towards vulnerable animals. Our approach to animal cruelty as a moral stain leaves us with little choice but to condemn the guilty, often as congenitally abnormal and deserving of cruelty themselves.  By separating out a certain group (abusers) and saying they deserve all they get, they should receive no sympathy--we are delivering exactly the wrong lesson to people who have the same attitude to animals.

If forced to choose between puppies and children, most communities will choose their children and defend that choice. But this is a false dilemma. The child that hurts animals is also a victim in need of help. They should be offered compassionate correction, hope, and the option of changing their ways and being again fully embraced by their local and digital community.  For those who condemn her acts and then attack her are displaying a rank hypocrisy that should not be accepted. "Sick Bitch" a commenter says, oblivious of the innate nonsense of denigrating the girl by comparing her to a being of low value... a dog.

We need to teach the animal abusing child what it feels like to look at cruel acts and be horrified, not what is feels like to be abused (a feeling that many of them will already be far too familiar with).  We need to be part of a cycle of compassion, not participate in a cycle of abuse.

Animal abuse is harmful to animals, and to abusers, and to the community.  It is a public health issue like drunk driving or smoking, not a subjective "moral" health issue like promiscuity or swearing. Only by managing to condemn the act without utterly demonising the perpetrator will we encourage people to see the early signs of trouble in themselves, their children and others around them--and to intervene to help and correct these aberrations.  Only then are we likely to make more headway in developing compassionate, non-violent, and inclusive communities in which both animals and people and nurtured and protected.
at 12:19 PM