A recent expose in the UK showed that many stores were (presumably) unwittingly selling real fur labeled as fake fur--most often from raccoon dogs. This is the fifth major exposure to find the same thing (2006, 2008, 2013, 2014, 2018) and so it seems this practice is enduring and not uncommon. 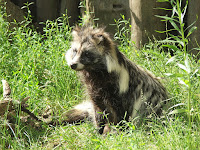 The raccoon dog (Nyctereutes procyonoides) and its various sub-species are canids found in China, Japan, Korea, Russia and a few other countries. It is not an especially rare animals and sometimes invasive. They are most similar to foxes but have distinct habits such as tree climbing.

The reason raccoon dog is popping up in this way is that under current production methods, its fur is cheaper than synthetics. The fur is sometimes referred to as murmansky. There is a long tradition of using their fur in Japan and Russia but currently most commercial farming occurs in China. Because raccoon dogs often fast over part of the winter period they are prone to obesity in farms.  They are also know to be susceptible to other welfare issues such as stereotypic behavior when not kept in groups.

Now, whether you choose to buy fur, or fake fur, is your choice.  But it is your responsibility to know what you are buying--just as it is the job or retailers to know what they are selling.  This is how you are buying real or fake fur: 1) Look at the base, real fur is attached to tanned skin -- fake fur is woven into a fabric base. If you can't see the underside, using a small embroider needle to whether the tip easily pushed through indicating the warp and weft of a fabric and not a solid hide 2) Hair that tapers at the end rather than looking "cut off" is probably real.

Email ThisBlogThis!Share to TwitterShare to FacebookShare to Pinterest
Labels: fur