No Cedar for Small Animals

Cedar bedding is often made from “red” cedar (including Juniperus virginiana and Thuja plicata). This product is sold in many pet stores as a general pet bedding, routinely showing small animals such as rodents on the packaging material. In some cases a small disclaimer might state that the product should not, in fact, be used with small animals. In my opinion this tiny warning, when present, is grossly inadequate.

Research very rarely gives ironclad evidence, but as I will discuss below the data on red cedar is more than adequate to convince most people that this bedding should not be used with small pet animals, and to raise serious concerns about using it as an animal bedding at all. When the composition of a wood bedding is in doubt it should be avoided, regardless of how it is packaged, labeled, promoted or sold by retailers. The main sources of concern about red cedar relate to respiratory irritation and toxic effects. While I am focusing on red cedar there are also less severe but valid concerns about other aromatic woods including white cedar and pine. 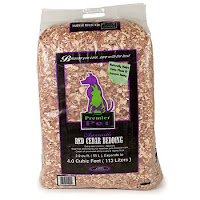 Sabine (1975) documented that mice had a lower barbiturate sleeping time, indicating that chemical in the cedar bedding were being metabolized as toxins in the liver. The activation of hepatic drug metabolizing enzymes has been extensively demonstrated ( see also: Vessel, 1967; Okano et al, 2009). And in some more vulnerable strains of mice, those on cedar bedding developed more liver and mammary tumors (Sabine, 1975).

In the course of another experiment Burkhart & Robinson (1978) noticed that when rats were born on cedar (Aromatic cedar products Inc., Gainesville, MO) they experienced 58% mortality and were 20% smaller at three weeks of age when compared to pups raised on corncob or aspen wood bedding. At this time all they knew was that: “[i]t appears that the pups were ingesting or inhaling a compound which was toxic to them.”

There is also a body of research showing that cedar bedding had no ill effect on mice under some circumstances (e.g. Vlahakis, 1977; Jacobs & Dieter, 1978; Becker et al, 2010). And Heston (1975) directly challenged Sabine’s assertion that cedar bedding explained inter-lab differences in tumor incidence. This suggests that certain products may be safe for some small animals, however it remains unclear exactly what the risk/protection factors are. For this reason I would continue to strongly advice that cedar bedding not be used for any small pets on the basis that it is difficult for domestic consumers to determine whether a specific bedding is dangerous and whether a specific pet animal is vulnerable to that type or level of toxin. 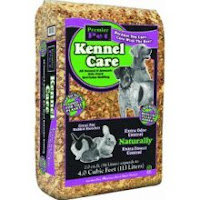 One factor may be whether the wood is “conditioned” (often by treating with steam) to reduce the levels of resins (Wirth, 1983; Okano et al, 2009). Carefresh bedding, specifically, has produce null results (Becker et al 2010) which may be due to the manufacturing of this product including having it "processed to remove potentially harmful aromatic hydrocarbons".

However it is often difficult for a domestic consumer to know for sure whether a product has been conditioned in this way, and whether the resulting product is safe. For a list of alterative beddings see “The Toxicity of Pine and Cedar Shaving” by Debbie Ducommun. And if you have limited options and find yourself needing to by wood bedding of unknown provenance, select hardwood products free of dust or strong ‘woody’ odors.

I would encourage you to raise these concerns with pet product supplier that you use, asking them not to stock cedar bedding which by its labeling or lack of warnings encourages use with small animals such as rodents.

Other Links:
Sick Rat
The Problem With Pine: A Discussion of Softwood Beddings