Recently I was reading through the 2nd (2006) edition of Suckow, Weisboth & Franklin's The Laboratory Rat. I had been thinking about the contribution of obesity to disease in rats so I flicked through to that section. I find it interesting that the chapter Spontaneous, surgically and chemically induced models of disease (Owens) is the only place obesity is covered. Owens states "Obesity is a common disorder that is rapidly increasing worldwide. It is estimated that 60% of the population of the United States is overweight or obese, and the number of individuals with this disorder is increasing."

It is only predictable that this chapter goes on to discuss only genetically abnormal rats that are obese or prone to becoming obese. It is also predictable that only human health consequences are discussed. However if one steps back a little from the subject, what is it the causes a large and increasing number of people to be overweight? Is it genetics? Certain individuals do suffer genetic abnormalities but when talking about 60% of the population I think it is clear that the predominant cause here is environmental. And it is an environment that we are, often without much thought, sharing with other animals.

When I watch dogs shows it seems to me that most of the animals being held up as paragons of their breed are, in fact, overweight--and in some cases obese. This is something a few commentators are beginning to recognise but so long as fat pedigree dogs are described coyly as having "excessive substance" I don't expect much progress. I see a similar effect in the dog park where predominantly well-padded pooches lumber around. Several studies suggest pet obesity prevalence is around 5% but I think it runs a little higher in my neck of the woods--more like our own human 60% or so. Owners of perfectly healthy slender dogs are subject to hostile stares and whispers. 'Does she ever feed it' 'You can see the ribs!' (of a whippet).

Being moderately overweight is not really a big deal so long as there are not serious health consequences and the person is happy with themself. However I do think we are losing our sense of normal body condition in both people and animals. We are poor judges of whether we and our animals are obese--and we seem relatively insensitive when weighting (so to speak) the health risks of obesity versus the abuse potential with under-feeding.

When I started working with rats in the laboratory one of my first concerns was their restricted diet. In many place rats are given about 75-80% of ad libertum. That is, you give them all the food they want and weigh how much they eat over a period long enough that the amount is stable day to day. The you take an average of the last week or so and feed them 80% of that amount each day. As a person used to feeding my pets pretty much anything they wanted this seemed a little mean. So I did a study to look at whether the rats would still work in the experiments if they were fed ad lib (demand curves shown below, for those interested). Because the rats were working for a preferred food during the study (sweetened condenses milk), I found the would still work hard enough for it to run an experiment, even when they had free access to diet pellets. 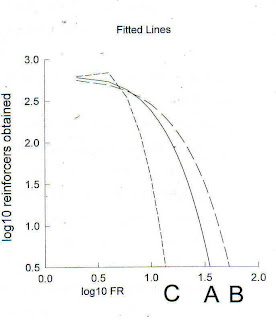 However, I was making the mistake of conflating what animals want and enjoy, for their overall welfare. It is quite clear that rats fed ad lib become fat, in fact the males become undeniably obese. And this obesity does have health consequences for the rats themselves. Obesity is a risk factor in many diseases that can be terminal or reduce quality of life in rats.

So the advice I have is not that we need to feed rats in the laboratory as if they are pets, but we should feed pet rats as if they were in the laboratory. A diet of 80% of free-feeding amounts is ample for rats (remembering to recalculate the amount several time a year to allow for growth). We should look at their body condition and actively question whether the rats is too thin or too fat. No one wants rats to be too hungry but energy-restricted diets can be chosen that promote feeling of satiety without those unhealthy consequences. And occasionally having time to anticipate a meal will only let them enjoy it more when it arrives.

As Richardson states in Diseases of Small Domestic Rodents (1997): "Care must be taken when feeding biscuits or treats that rats do not become obese. Obesity will lead to a shorter life span, poorer breeding capacity and sore hocks. Tumour development is also more common in obese animals. Obesity can be corrected by feeding a ration restricted in calories, and introducing more fruit and vegetables..."

Yes, we want animals to be happy and have things they enjoy, but health and longevity need to be a balanced part of the picture. So if you have pets, please consider their body condition and look into providing diet and exercise that will support their overall health. It can also help us. I know that having a border-collie-cross (exercise is a must!) certainly helps keep me active. Although while I am sitting on the sofa I would rather eat a box of cookies and watch TV I always feel better after getting outside for a while and entertaining myself through activities... and a cookie tastes all the better for it when I get back. :)