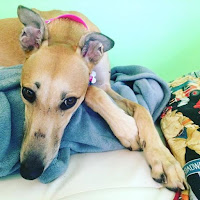 Most discussion of breed specific Legislation and dogs centers on the banning of the pit bull type in various jurisdictions. Sometimes a grab bag or other "big scary dogs" or breeds sometimes used in fighting might be included. But one interesting variation is Victoria in Australia where anyone walking they greyhound in public must have it leashed and muzzled at all times.

Specifically:
"27. Restraint of greyhounds (1) If a greyhound is outside the premises of its owner and is not— (a) muzzled in a manner which is sufficient to prevent it causing injury by biting; and (b) under the effective control of some person by means of a chain, cord or leash— the owner of that greyhound and any person for the time being in charge of the greyhound are each guilty of an offence and liable, upon conviction, to a penalty of not more than 3 penalty units for a first offence and 5 penalty units for a second or subsequent offence"

If any of you are familiar with greyhound, you will know they are, on average, no more dangerous than any dog of similar size and conformation.  So what this regulation, which endures even after considerable lobbying to remove it, shows is that breed specific bans and limitations become established in a very specific cultural context--but once in place they are very resistant to change.

Recent revisions to the law exempt dogs adopted from a certain adoption program, who are tested, and marked with a green collar.  But this persists in representing any other greyhound from any other source as an especially dangerous dog that may never appear in publish off leash (even in a dog park) or unmuzzled.

As an owner of two greyhounds I find this gives me a sudden and very clear insight into how the average owner of a pit bull type must feel.  Because at one time people training greyhounds on public lands allowed their dogs to bother and sometimes attack people, the rights of the entire breed were curtailed. But the problem was never innately connected to the breed, only the irresponsible choices of their owners. And greyhounds in Victoria are, to this very day, subject to discomfort and unreasonable restrictions as a result.

Which is not to say that greyhound owners in other places do not frequently choose to not let their dog off leash, or to use a muzzle when they deem it necessary, but they do so based on the specific situation and the specific dog just like everyone else.  Which, in my opinion, is how it should be.  For all breeds.
at 9:49 AM

Email ThisBlogThis!Share to TwitterShare to FacebookShare to Pinterest
Labels: greyhounds, the law